Hilton was founded on the belief that travel can make the world a better place, a belief that still rings true more than 100 years later. A new study by Hilton found that 77% of travelers say their travel experience is enhanced by different ethnic and cultural experiences and 41% say traveling has given them an appreciation of other people and other cultures. However, after a year spent at home, Americans have missed out on not just the opportunity to make new memories, but also new experiences that inspire them to become more cultured, worldly and understanding through travel.

By celebrating these groups, we are also encouraging travelers to use this month, and onward, as an opportunity to learn through cultural experiences that have been missed in the past year. While many museums are still closed, the next best way to learn about a culture is to immerse oneself in it. Because no matter where you’re located geographically in the country, there is most likely somewhere nearby, even in your own backyard, where you can visit to learn about and support the diverse cultural groups that make up the Asian and Pacific Islander diaspora in the United States. And there is definitely a Hilton to stay in along the way! 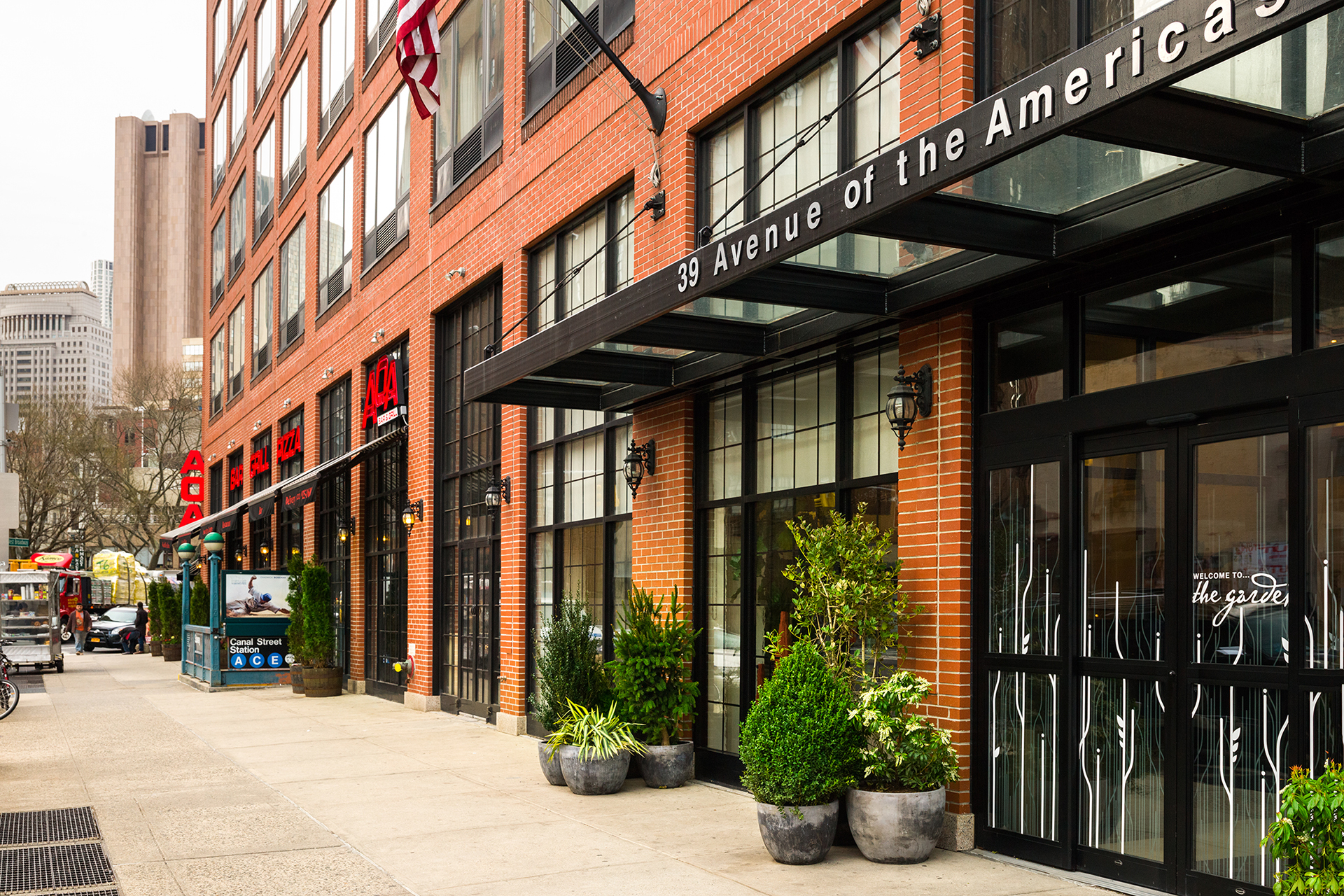 The largest Chinatown in the United States and the site of the largest population of Chinese in the western hemisphere, Chinatown NYC is a must-visit destination for learning about the expansive history and experiencing the rich culture of the Chinese diaspora. Formed during the mid-19th to early 20th centuries, Chinatown NYC is both a tourist attraction and home to a majority of New York City’s Chinese population. Spanning several blocks through Lower Manhattan, the bustling, densely populated community is teeming with things to do, see and experience, including the seemingly never-ending number of restaurants, bars and shopping stalls packed onto the narrow, alley-like streets. Head down Canal Street for open-air bazaar style shopping followed by a peaceful trip to the Mahayana Buddhist Temple – the oldest Chinese Buddhist temple on the East Coast and home to the tallest Buddha statue in NYC. Although it is currently closed to the public, portions of The Museum of Chinese in America’s collections are available online and are worth checking out for anyone interested in learning about the history, heritage, culture and diverse experiences of American communities of Chinese descent. Just a short walk away is Hilton Garden Inn New York/Tribeca. Conveniently located between New York’s popular Tribeca, SoHo and Nolita neighborhoods with the Canal Street subway station right outside the door, the hotel is perfect for travelers on the go.

Drive about 35 minutes southwest from Manhattan (or a short rail ride from Penn Station to Metropark Station) and you’ll come across Edison in central New Jersey, or as it’s more affectionately known by those familiar with the area, Little India. Comprising 1.5 miles in the center of town on Oak Tree Road, Little India is a flourishing ethnic business center and hub that attracts South Asian customers from all along the East Coast. With more than 400 South Asian businesses, grocery stores selling authentic ingredients imported straight from India, and theaters premiering the latest Hollywood and Bollywood blockbusters, Little India has become one of the largest and most diverse South Asian communities in the United States. If you’re looking for an authentic local South Asian experience, Little India, where Indian immigrants and tourists visit to feel at home, is the place to see. A short drive away is the Home2 Suites by Hilton Edison. This all-suites hotel offers spacious rooms with separate living and sleeping areas, complete with a kitchen and sofa bed in each suite. 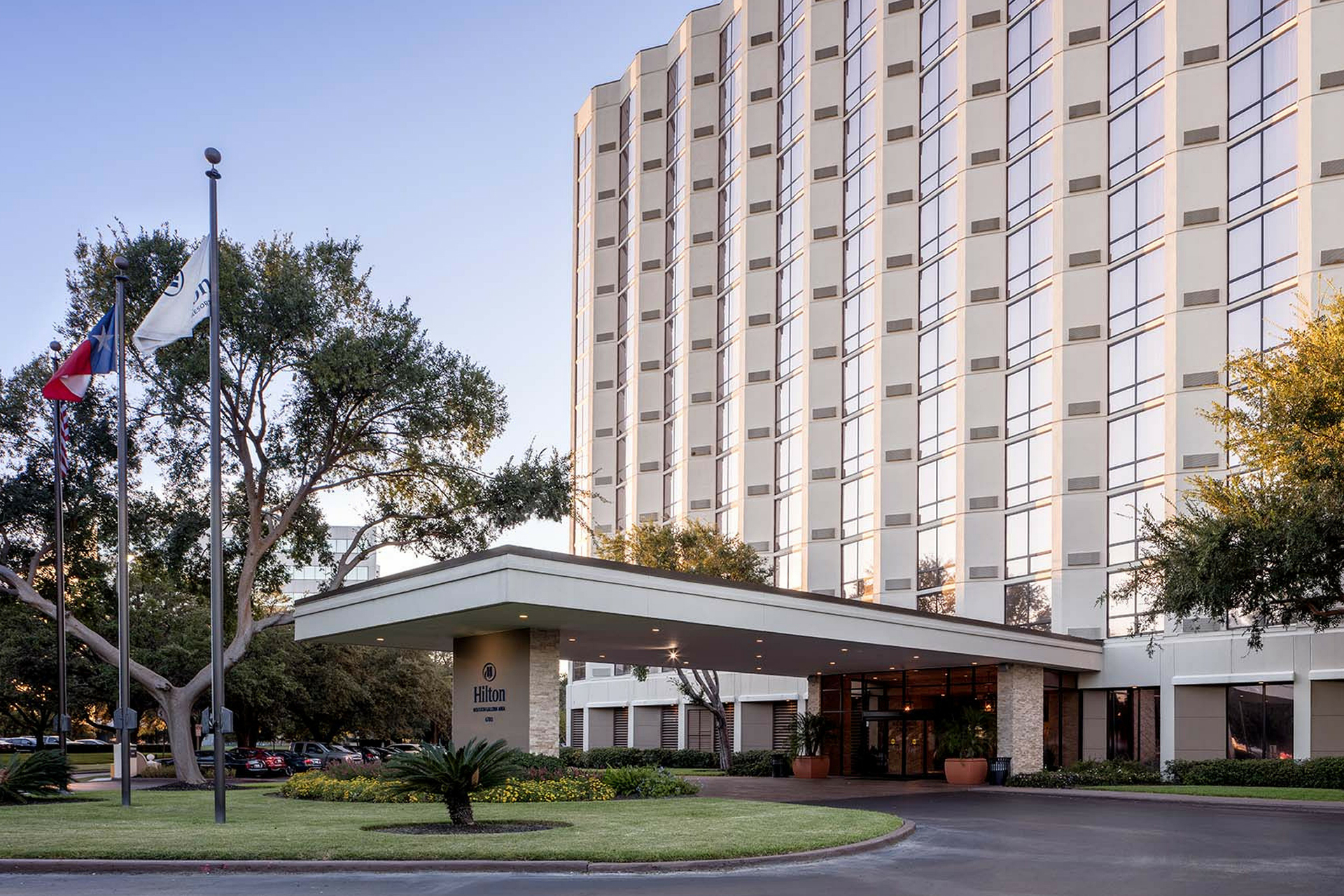 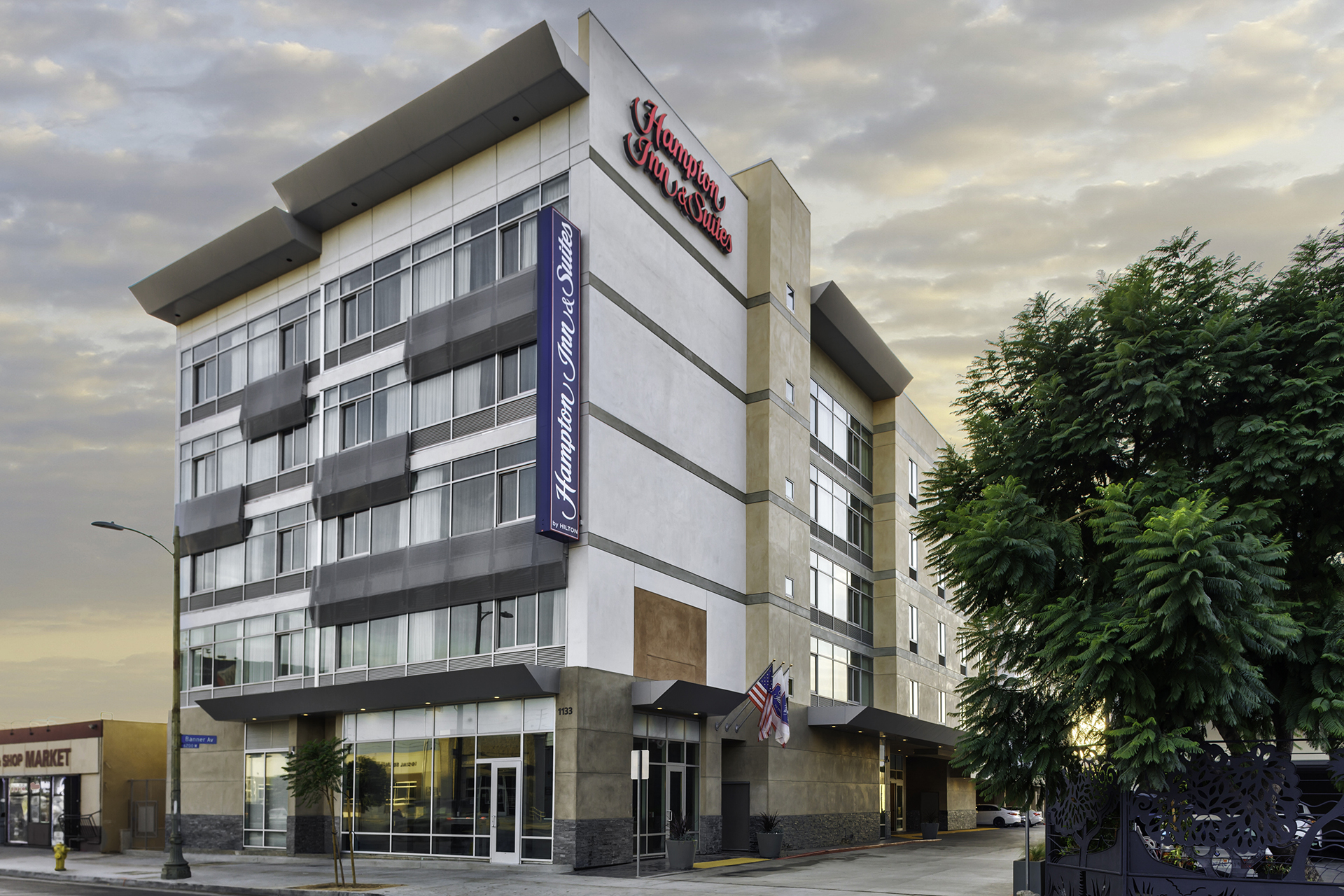 No list chronicling the Asian experience in the United States is complete without mentioning the various, diverse Asian communities found along the West Coast, beginning with San Francisco’s Chinatown. Spanning 24 blocks in downtown and established in 1848, San Francisco’s Chinatown is the oldest in North America. Tourists are encouraged to enter through the iconic Dragon Gate archway on Grant Avenue with its stone pillars, green pagodas and dragon sculptures. Some of California’s best Chinese restaurants, galleries, tea shops and karaoke bars can be found in San Francisco’s Chinatown. History buffs can’t miss the Sing Chong Building – one of the most prominent and most photographed Chinatown landmarks – the first building rebuilt following the 1906 earthquake and fire that leveled most of the city and completely destroyed the original Chinatown neighborhood. Stay at Hilton San Francisco Financial District for easy access to Chinatown and the Chinese Culture Center of San Francisco, located in the same building as the hotel.

Take a trip along the coast to journey down South – Have you reached Southern California or Southeast Asia? Golden Apsonsi Thai angel statues, the half-human, half-lion mythical creature of Thai folklore, stand guard at the four corners of a six-block area in East Hollywood, marking visitors’ arrival at the gateway entrance of Thai Town Los Angeles. The first and only officially recognized Thai Town in the United States, it was officially designated a Los Angeles neighborhood in 1999, more than three decades after Thai Americans first began settling in the area. Today, Thai Town is the go-to place in the United States to enjoy spicy and savory curry, noodle and pork dishes, and shop for authentic Thai wares and ingredients – formerly home to the first Thai grocery store in the country. Hampton Inn & Suites Los Angeles/Hollywood is just a short car ride away, right off Santa Monica Boulevard and within walking distance of a host of attractions and dining choices.

Head southeast to make your way to Downtown L.A., and more notably, Little Tokyo – the largest of the three remaining official Japantowns in the United States. With roots dating back to the late 1800s, and declared a National Historic Landmark District in 1995, Little Tokyo is a SoCal cultural staple that attracts visitors from far and wide. Little Tokyo’s five city blocks are home to some of the best sushi and ramen restaurants in the city, serene Japanese gardens, as well as historic monuments and cultural sites. Stop by the Go For Broke Monument dedicated to the Japanese-American men and women who fought in WWII or visit the internationally recognized Japanese American National Museum to learn about the historic and modern experiences and stories of Japanese Americans. Visit and stay at Hilton Los Angeles/San Gabriel for a relaxing retreat just outside of the hustle and bustle of downtown Los Angeles.

After the fall of the Khmer Rouge regime, a large wave of Cambodian refugees fled to the United States, with the majority settling in the coastal town of Long Beach, California in the 1980s. The community would later be officially recognized as Cambodia Town in 2007. This 1.2-mile strip in the heart of Long Beach is home to Khmer stores and businesses, arts and culture centers. As home to the largest concentration of Cambodians of any city outside of Cambodia, Cambodia Town is the go-to for authentic restaurants cooking up Khmer comfort food such as classic noodles, porridge, soups and amok, a signature dish of steamed fish and curry. Stay at Hilton Long Beach for a coastal California getaway. 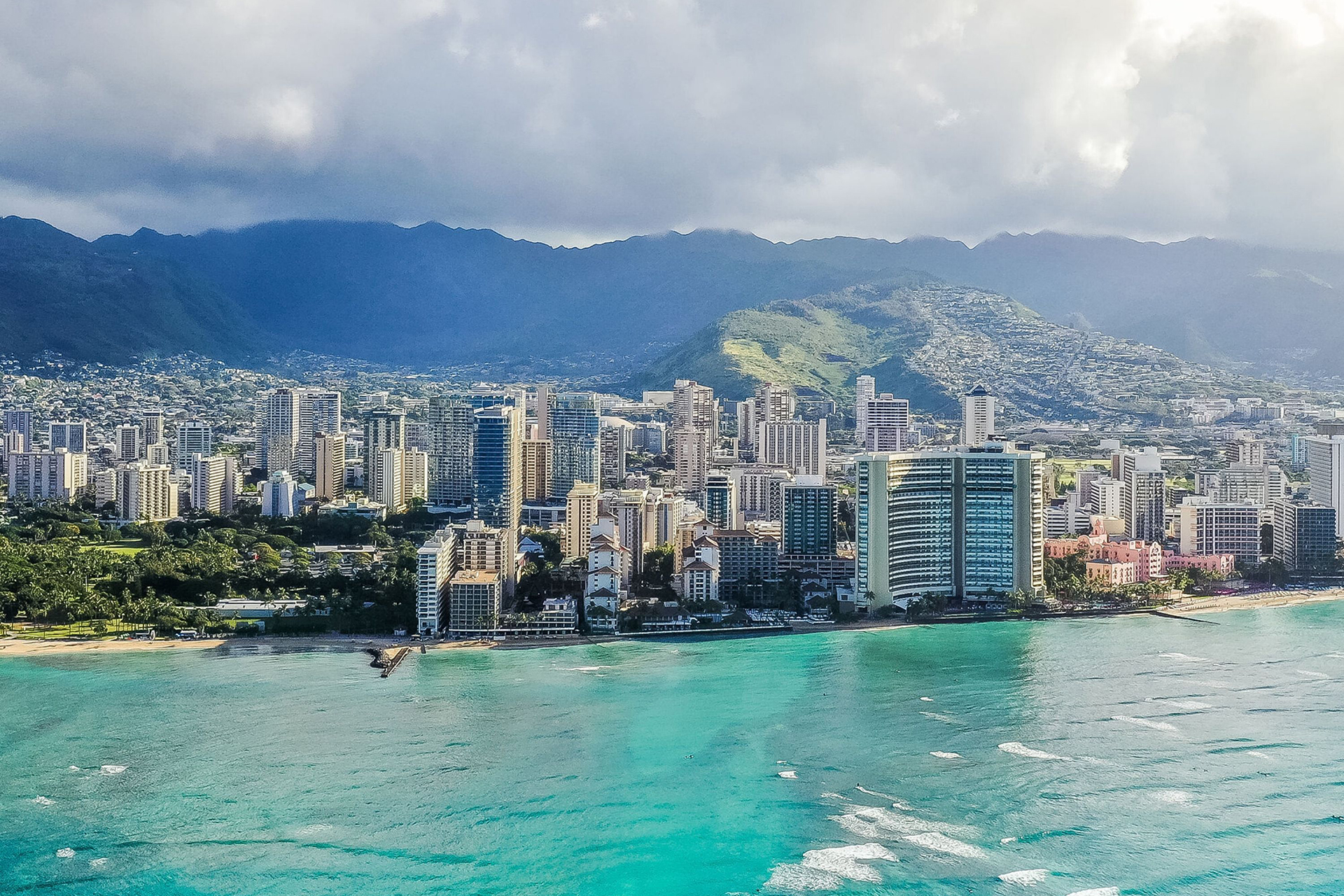 More than 1,500 years ago, Polynesians first arrived in Hawaii and more than 170 years ago, Honolulu became the capital of what was then the Independent Kingdom of Hawaii. Today, Honolulu, the capital city of the 50th state of the United States, is the largest population center for Pacific Islanders in the country and one of the most ethnically diverse cities. Settled on a narrow shoulder on the south shore of the Island of Oahu, Honolulu is the economic and entertainment center of Hawaii. Its beautiful beaches and historic sites attract tourists from all over. Most notable to Hawaiian history is Iolani Palace, the official residence of Hawaii’s last reigning monarchs and the only royal place in the United States. Embassy Suites by Hilton Waikiki Beach Walk is one block from swimming and sunbathing on Waikiki Beach and a short drive from the International Marketplace. If you’re located on the mainland and can’t make a trip across the Pacific, the Smithsonian’s virtual Asian Pacific American Center is a great way to learn more.

Hilton (NYSE: HLT) is a leading global hospitality company with a portfolio of 18 world-class brands comprising 7,000 properties and 1.1 million rooms, in 122 countries and territories. Dedicated to fulfilling its founding vision to fill the earth with the light and warmth of hospitality, Hilton has welcomed more than 3 billion guests in its more than 100-year history, earned a top spot on Fortune's 100 Best Companies to Work For list and been recognized as a global leader on the Dow Jones Sustainability Indices for five consecutive years. Hilton has introduced several industry-leading technology enhancements to improve the guest experience, including Digital Key Share, automated complimentary room upgrades and the ability to book confirmed connecting rooms. Through the award-winning guest loyalty program Hilton Honors, the 139 million members who book directly with Hilton can earn Points for hotel stays and experiences money can't buy. With the free Hilton Honors app, guests can book their stay, select their room, check in, unlock their door with a Digital Key and check out, all from their smartphone. Visit stories.hilton.com for more information, and connect with Hilton on  Facebook, Twitter, LinkedIn, Instagram and YouTube.

The award-winning Hilton Garden Inn brand provides business and leisure guests upscale, affordable accommodations and modern amenities for an experience that is simply on another level. The Hilton Garden Inn Promise affirms the brand’s goal to make each guest’s stay better and brighter. Guaranteed. With more than 950 hotels in 55 countries and territories around the world, the brand ensures today’s busy travelers have a bright and satisfying experience, starting with the first hello. Experience a positive stay at Hilton Garden Inn by booking at hgi.com or through the industry-leading Hilton Honors app. Hilton Honors members who book directly through preferred Hilton channels have access to instant benefits. Learn more about Hilton Garden Inn at stories.hilton.com/hgi, and follow the brand on Facebook, Instagram and Twitter.

About Home2 Suites by Hilton

Home2 Suites by Hilton, one of the fastest growing brands in Hilton’s history, is a mid-tier, all-suite, award-winning extended-stay hotel concept designed to offer stylish accommodations with flexible guest room configurations and inspired amenities for cost-conscious guests and their pets. With a commitment to environmentally friendly products and hotel operations, Home2 Suites by Hilton offers complimentary hot breakfast, innovative and customizable guestroom designs, laundry and fitness areas, free Wi-Fi, multiple outdoor spaces, 24-hour business centers, expansive community spaces and pet-friendly environments. Home2 Suites by Hilton has more than 550 open hotels with more than 590 in development. Experience a positive stay at Home2 Suites by Hilton by booking at home2suites.com or through the industry-leading Hilton Honors app. Hilton Honors members who book directly through preferred Hilton channels have access to instant benefits. Learn more about Home2 Suites by Hilton at stories.hilton.com/home2suites, and follow the brand on Facebook, Twitter and Instagram.

About Hampton by Hilton

As the No. 1 ranked lodging franchise for the last 13 years by Entrepreneur®, Hampton by Hilton — including Hampton Inn by Hilton and Hampton Inn & Suites by Hilton — serves quality-driven and value-conscious travelers at more than 2,800 properties in 34 countries and territories around the globe. The brand continues to lead its segment by providing guests with high quality, thoughtfully designed accommodations and amenities, such as modern and spacious rooms, complimentary Wi-Fi and free hot breakfast. Hampton by Hilton is committed to delivering an exceptionally friendly and authentic service all backed by the 100% Hampton Guarantee™️. Experience a positive stay at Hampton by Hilton by booking at hampton.com or through the industry-leading Hilton Honors app.  Hilton Honors members who book directly through preferred Hilton channels have access to instant benefits. Learn more about Hampton by Hilton at stories.hilton.com/hampton, and follow the brand on Facebook, Instagram and Twitter.

About Embassy Suites by Hilton