Each year in June, to commemorate the Stonewall Uprising of June 1969, Pride events are held in the United States and several cities around the world. The Library of Congress declares the purpose of Pride Month is to “recognize the impact that lesbian, gay, bisexual and transgender individuals have had on history locally, nationally and internationally.” To counter the unjust shame and social stigmas that characterized the LGBTQ+ community in the past, “Pride” is now one of the driving forces for LGBTQ+ rights movements around the world, encouraging love, acceptance and the freedom to be oneself truly and openly.

Although many Pride celebrations have been canceled or postponed this year, there are still plenty of ways to get out and celebrate, support and learn about LGBTQ+ communities this June. Read on to learn what Hilton properties are doing to keep the tradition going in LGBTQ+ hubs in the United States and Mexico.

On June 28, 1969, police raided the Stonewall Inn, a gay club in New York City’s Greenwich Village. The events that followed would later be known as the Stonewall Uprising and would set a fire under the already burgeoning gay rights movement in the United States and around the world. Today, the Stonewall Inn is a national monument and Greenwich Village, as well as several other New York City communities, serves as an LGBTQ+ hub with historic sites and monuments, community centers, restaurants, bars and nightlife to visit during a trip to the Big Apple.

Just minutes by bus, metro or taxi from the city’s most historic neighborhoods, including Greenwich Village, Tribeca, SoHo and Wall Street, Conrad New York Downtown is the perfect home base for a trip exploring NYC’s LGTBQ+ heritage and culture scene. From June 18-30, Loopy Doopy Rooftop Bar, located on the hotel’s 16th floor with scenic New York Harbor views, is putting a spin on its signature drink to offer Pride Poptails, featuring a Mom & Icepops rainbow Boozy Pop. Book a stay or just drop in for a drink or bite to eat this Pride Month. 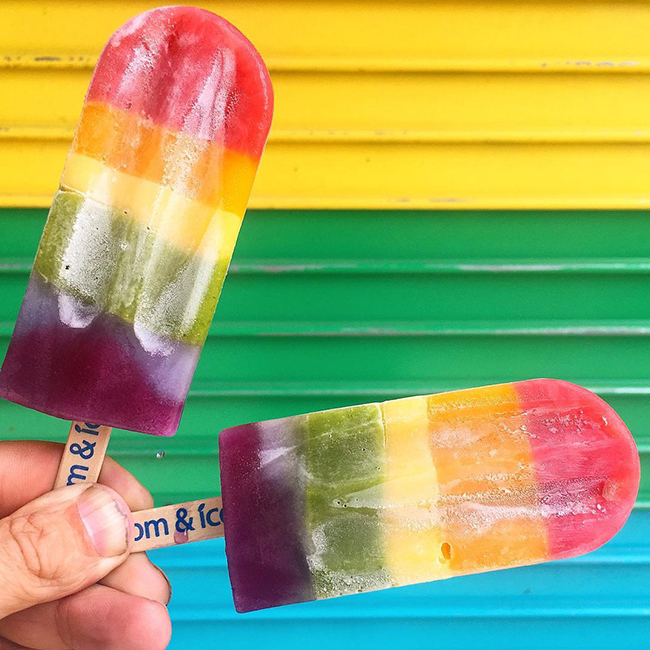 Much like other gay-friendly communities, Washington D.C. is known for its happening party scene, but it’s not all about the nightlife. The District has a long history of making change in the LGBTQ+ community, including being home to the headquarters of several LGBTQ+ and human rights organizations, Black Pride, the nation’s first and one of the largest African-American Pride events, and the oldest LGBTQ+ newspaper in the United States, The Washington Blade. Moreover, national policy is set there, like the 2015 Supreme Court decision to legalize same-sex marriage in all 50 states.

Speaking of tying the knot, LGBTQ+ couples looking to get married this June, can find inspiration from TikTok’s viral five-part engagement story that concluded with a surprise wedding ceremony at SUMMIT, Conrad Washington, DC’s 11th floor rooftop event terrace and bar. Not hearing those wedding bells just yet? No worries. A selection of eco-friendly and socially conscious food and drink options provided by local sourcing and community partnerships are calling your name. The hotel’s exciting new partnership with DC’s LGBTQ+ owned Red Bear Brewing Co. means the brews aren’t limited to Pride Month. Stop in any time of year for a taste. 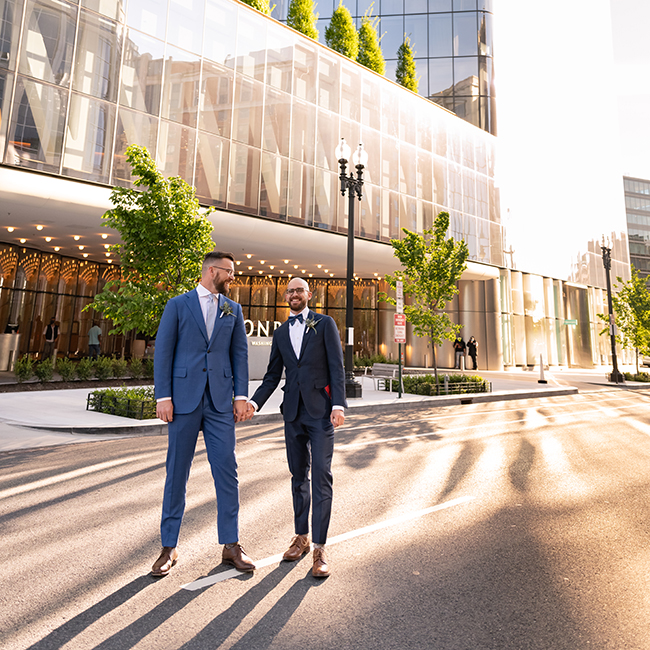 Newly-married couple, Michael and Samuel, outside of Conrad Washington, DC following their surprise wedding in May. Michael surprised Samuel with a wedding instead of their planned engagement photo session and the couple exchanged vows with all the couple’s family and friends present. Credit: Damon Bowe Photography

Phoenix is a southwestern desert oasis with metropolitan enclaves offering something for both nature lovers and city dwellers. Seventh Avenue, home to one of the city’s most vibrant LGBTQ+ nightlife scenes, is the first stop for exploring gay-friendly Phoenix. LGBTQ+ businesses, including restaurants, bars and shops, welcome LGBTQ+ patrons and allies alike. Looking for a photo op? Stop by the site of one of Phoenix’s two iconic rainbow crosswalks at the intersection of Seventh and Glenrosa Avenues.

A short drive away is Arizona Biltmore, A Waldorf Astoria Resort. With seven pools, four diverse restaurants and bars and two championship golf courses, as well as a spa that overlooks lush gardens and surrounding peaks, the resort is the perfect desert getaway. In honor of Pride month, the iconic resort will be hosting a month-long celebration for guests and local visitors. Aptly named "Iconic Love, In Color," the recently transformed resort is offering nightly rainbow light shows, colorful culinary creations, romantic packages and much more for all to enjoy. Stop by the adults-only Saguaro Pool and Spire Bar for the “Bubbles & Oysters” package, complete with a bottle of Veuve Clicquot Yellow Label paired a dozen oysters on the half-shell with fresh piquillo peppers and mango. The “Cake, In Color” special sweetens the deal with a decadent vanilla rainbow layer cake with fresh raspberries topped with white chocolate and gold luster dust. Feeling thirsty after a day in the desert? Grab a rainbow sugar rimmed “Love Makes the World Go Round” specialty curated cocktail from Frank & Albert’s. 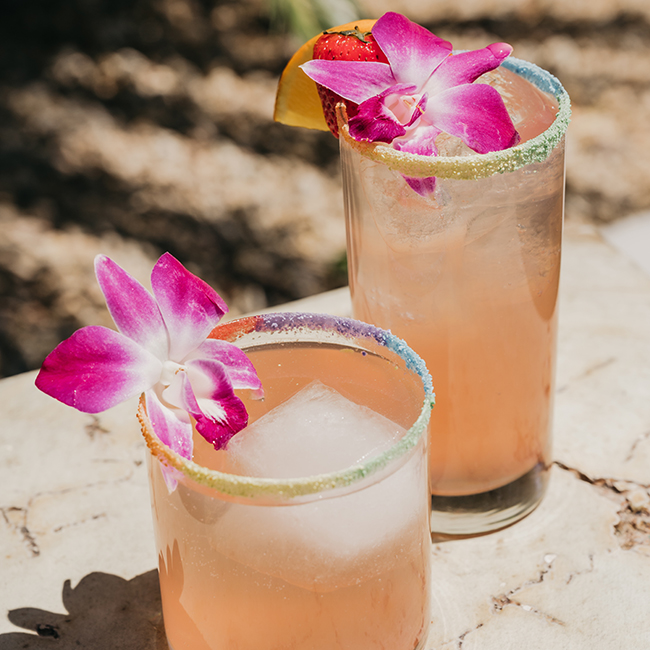 Who doesn’t love a splash of color and an orchid in their drink? Arizona Biltmore’s “Love Makes the World Go Round” is sprinkled with colorful sugar for fun and St. Germain and Prosecco for a kick. Credit: Arizona Biltmore, A Waldorf Astoria Resort

No Pride list is complete without mentioning San Francisco, the birthplace of the rainbow flag, the first city in the U.S. to legalize same-sex marriage and home of one of the world’s most popular Pride Parades. While the entire city is truly gay-friendly, the Castro District is considered the epicenter of gay life in the city. There you’ll find LGBTQ+ owned and supported restaurants, bars and theaters galore. During your visit, make a trip to the GLBT Historical Society, the first standalone museum of LGBTQ+ history and culture in the U.S., or stop by Harvey Milk Plaza, the memorial to San Francisco’s—and the United States’—first openly gay elected official, Harvey Milk.

At Hilton San Francisco Union Square, Pride comes in every color of the rainbow. As part of their support of San Francisco’s Pride celebrations, the hotel’s Herb N’ Kitchen has created Pride picnic baskets filled with two specialty sandwiches, two salads, chips, a Pride-themed cookie or candy, two beverages of your choice, two Pride flags, Pride bandanas, masks and one pet treat. Grab your partner and a picnic basket to go and head to the hotel’s rooftop, Oracle Park for one of their Pride Movie Nights, or any one of the many scenic spots in San Francisco. 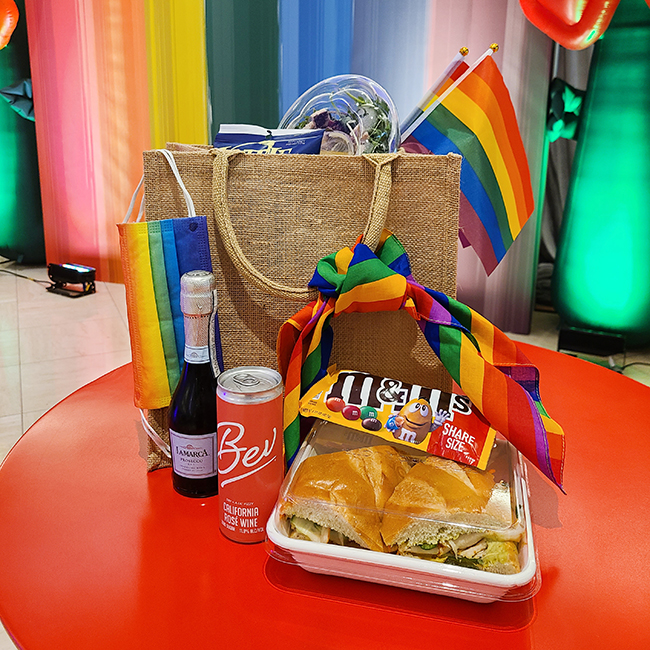 The perfect accessory to any outfit. Hilton San Francisco’s Pride Picnic basket is all you need to join in the Pride Celebrations.

Mexico City is the political, economic and cultural heartbeat of Mexico, as well its capital city. But it is also one of the capitals for LGBTQ+ travel in Latin America. The first city in Mexico to legalize same-sex marriage and home to one of the largest Pride celebrations in Latin America, Mexico City is the place to be for LGBTQ+ travel just south of the U.S.–Mexico border. Zona Rosa, home to the city’s LGBTQ+ community and the sponsor of previous years’ Pride Parade, is a must visit stop for celebrating this Pride Month.

A short ride away by car or metro is Hilton Mexico City Reforma. Located opposite Alameda Central Park and a short walk from the Palacio de Bellas Artes, the high-rise hotel is in the heart of Mexico City. To celebrate Pride Month, the hotel created a special drink to share with guests. The Proud Spirit mixes Malibu Rum, Captain Morgan Spiced, blue curaçao, midori, pineapple juice, pineapple concentrate and grenadine for a flavorful, rainbow cocktail. 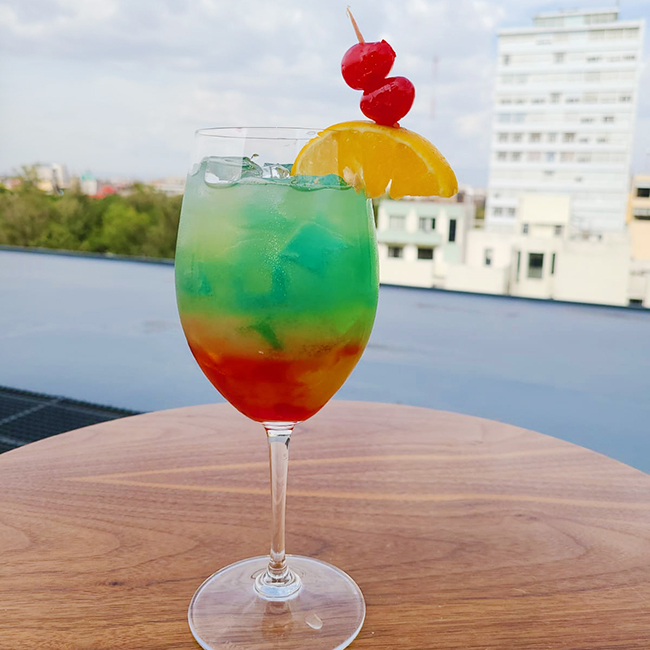 Regardless of where your travels take you this summer, remember to sign up for Hilton Honors, Hilton’s award-winning guest loyalty program. It’s free and easy to join, and members who book directly through preferred channels receive exclusive benefits, discounts, access to contactless technology through the Hilton Honors app and hundreds of ways to earn and redeem Points. Plus, if you’re traveling with family or friends, you can pool your Points to cover your stay, free of charge.