The iconic Palmer House, A Hilton Hotel first opened its doors on September 26, 1871, and since then has welcomed millions of guests, hosted legendary entertainers and celebrated countless birthdays, weddings and milestones.

If you’ve stepped foot in the hotel, chances are you’ve been enamored by the ornate lobby with its vaulted ceiling frescoes and impressive chandeliers. But there’s more to the hotel than what meets the eye. If the walls of this historic hotel could talk, here’s what they would tell you.

It started with a love story. Potter Palmer, a Chicago businessman who helped develop Chicago’s iconic State Street, was introduced by his former business partner, Marshall Field, to Bertha Honoré Palmer, a young socialite. The two began an incredible courtship and to show his love and admiration for Bertha, he gifted her with one of the most extravagant wedding gifts ever – the Palmer House hotel. 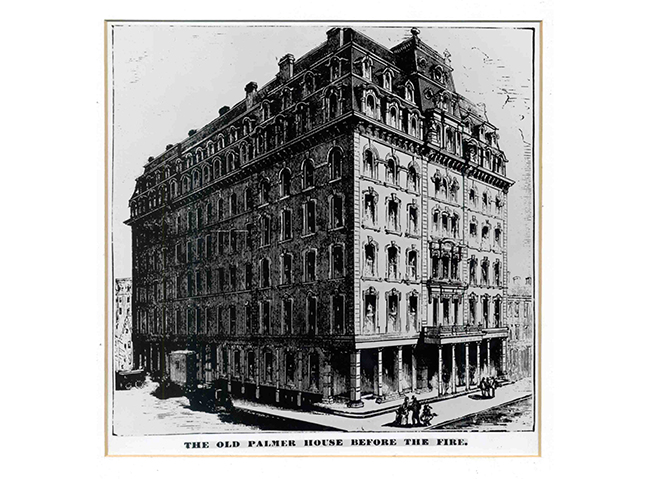 Rebuilding From the Great Chicago Fire

The original Palmer House was destroyed 13 days after its grand opening in the Great Chicago Fire. Potter Palmer was determined to rebuild. Potter constructed the world’s first “fireproof hotel” and two years later, the property reopened on November 8, 1873, to become one of the nation’s longest continually operating hotels. 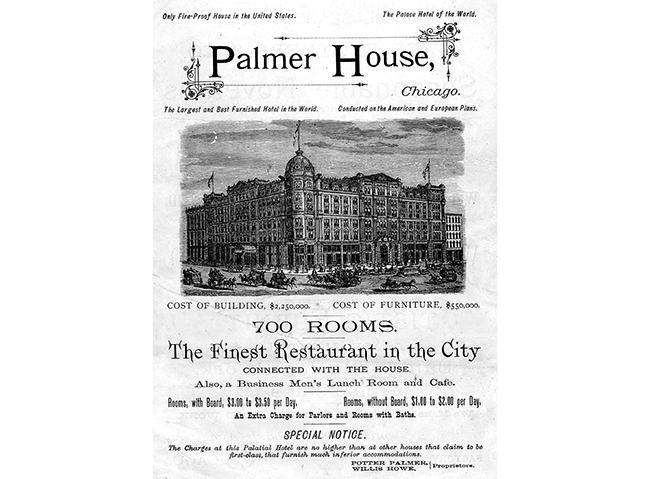 The Crown Jewel of the Building – the Lobby

Shortly after befriending the famous artist Claude Monet in France, Bertha began decorating the Palmer House with paintings and other pieces inspired by her French heritage. She eventually accumulated over 220 paintings, the largest collection of impressionist art outside of France, and willed them to the Art Institute of Chicago – including numerous Monets and Renoirs.

She commissioned French muralist Louis Pierre Rigal to compose 21 unique frescoes on the lobby’s magnificent domed ceiling. The murals honored Greek mythology, including Aphrodite the goddess of love; Apollo the god of music; and Pluto the god of the underworld. The lobby ceiling has been restored inch by painstaking inch by Lido Lippi, who’d undertaken a similar project for the Sistine Chapel. To restore the ceiling of Palmer House, he worked flat on his back raised on scaffolding throughout the night while listening to Mozart.

The Italian marble staircase that takes you to the Empire Room is one of only two constructed in this particular manner; the other is in London’s St. Paul’s Cathedral. Louis Comfort Tiffany designed the 24-karat gold-dipped chandeliers that grace the ceiling, as well as the majestic Winged Angels, at 1.25 tons they were the largest bronze statues he’d ever produced. 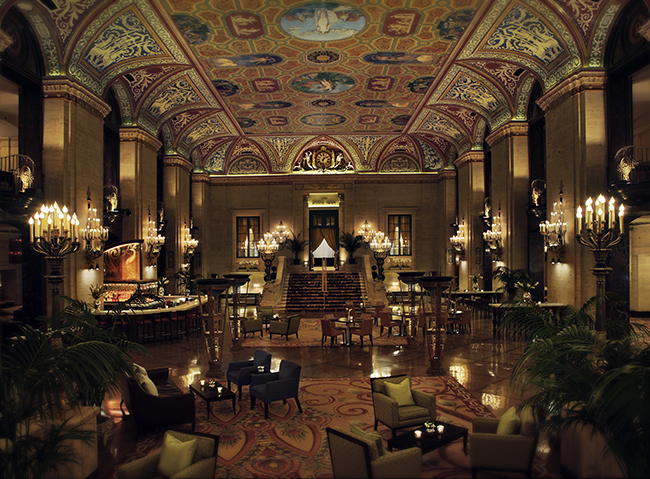 The Birthplace of the Brownie

The brownie was created in the Palmer House Kitchen, specifically under the direction of Bertha Palmer to be served at the World’s Columbian Exposition, or Chicago World’s Fair, in 1893. Bertha, who was president of the Ladies Board for Managers for Exposition, was creating box lunches for the Women’s Pavilion. She asked her chef to prepare a dessert, something more unique than a piece of pie or cake, and something that would be easy to eat and transport. She suggested he make something like a cookie, but denser and more decadent with chocolate. The recipe Bertha and the chef came up with is still used today. To celebrate the sesquicentennial, the property is launching a Bertha Brownie Latte a playful spin on the original fudge brownie, available at Lockwood Express.

In addition to the brownie, throughout its history, Palmer House has become a hotel of many firsts, including: 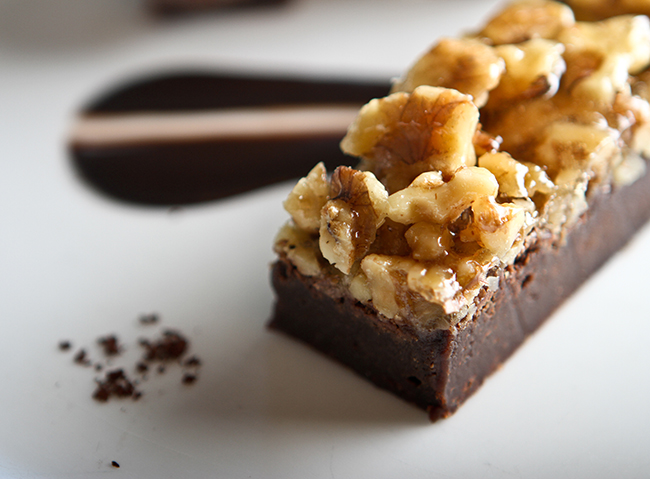 If you’ve stayed at Palmer House, a Hilton Hotel, you’ve joined a long list of people who have spent a night at 17 East Monroe Street. Every sitting president since Ulysses S. Grant (with the exception of George W. Bush) has rested their head on a pillow at Palmer House, and Presidents James Garfield, Grover Cleveland, William Jennings Bryan, William McKinley, Ronald Regan, Bill Clinton and Barack Obama have all campaigned at the property.

The history of Grant and the Palmers was intertwined. President Grant was married to Bertha Palmer’s sister Ida, and in 1879, the hotel hosted the “Greatest Banquet in American History” to commemorate the return of the President’s trip from around the world. A gala was hosted for 500 dignitaries and Civil War heroes, including General William Sherman and Phillip Sheridan, with Mark Twain, Potter’s friend, as master of ceremonies. 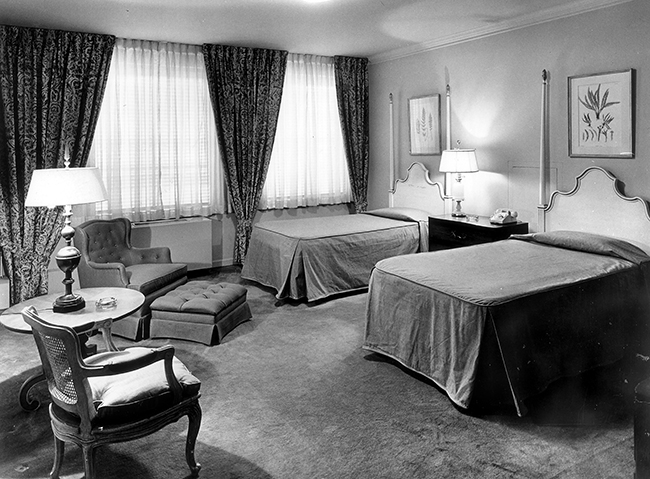 The Center of Chicago’s Social Scene

Designed in the style of the High French Empire, the room’s staircase, statuary and entry pay homage to the Paris Opera. The grand staircase catches the eye when entering the hotel, a sign that something extraordinary is taking place in the room. Originally the hotel’s fine dining restaurant, The Empire Room added dancing in 1933 during the World’s Fair and it was a quick crowd-pleaser. When Conrad Hilton purchased the hotel in 1945, he suggested entertainment be escalated to full cabaret reviews, with as many as three opening acts, including the Merriel Abbott dancers. While today a destination for weddings and gala events, the Empire Room has hosted several legendary entertainers. 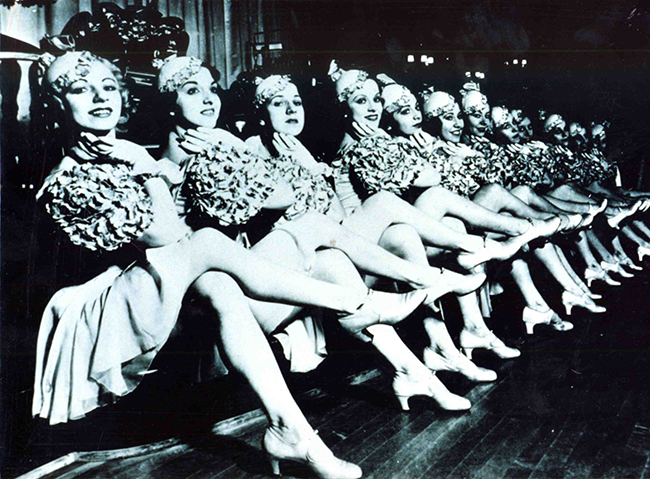 How to Celebrate the 150th Anniversary

Palmer House has many activations to celebrate its sesquicentennial throughout the year, with special programming including: 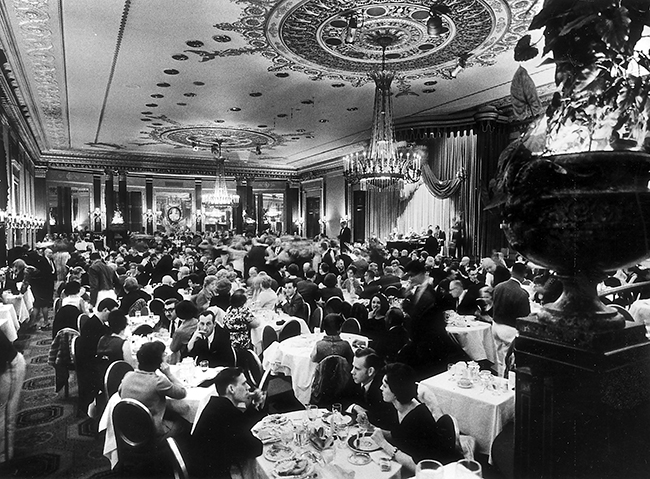 Guests can experience a night at this historic hotel by booking at palmerhousehiltonhotel.com.